Harmony Organic started as two farm families with a dream to provide delicious organic milk to the public without compromising their beliefs or principles.  Lawrence and Mathilde Andres, co-founders and now sole owners of Harmony Organic Dairy Products, moved to Canada from Switzerland in 1979 and became Canada’s first organic dairy farmers. Then in 1992 Lawrence initiated the first organic dairy producers’ group in Ontario.  In 1994 the segregation of organic milk became a reality and on September 24, 2001, Harmony Organic was officially launched.

The Andres farm, located in the picturesque, rural community of Kincardine, has been exclusively organic from the start. Everything is grown naturally without the use of chemicals on organically certified land. 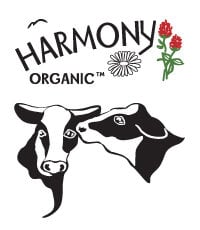 What Do They Supply